Having been heavily criticised for its antiquated designs at the World Exhibition of 1900 in Paris, the Meissen porcelain factory commissioned avant-garde designers to produce more vibrant pieces. 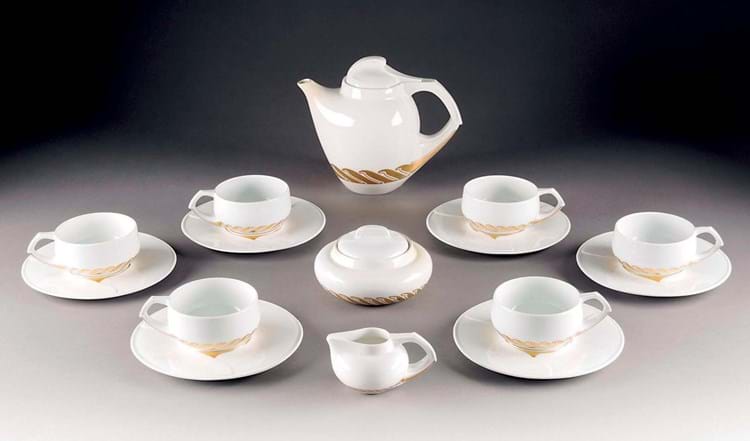 Luxurious gilt versionof the Meissen Peitschenhieb (Whiplash) service coming up for sale at Hargesheimer in Dusseldorf on March 12-14 estimated around €6000.

Among them was the Belgian-Flemish architect and designer Henry van de Velde. His task was to create an extensive dinner and coffee service. After many attempts, his Peitschenhieb (Whiplash) service finally made it onto the market in 1903. The name refers to the dynamic shape of the individual pieces and the curving lines of the decoration.

As a rule, this was painted in blue. Much rarer was the more luxurious gilt version, an example of which – a coffee service for six people – is coming up for sale in the 100th auction at Hargesheimer in Dusseldorf on March 12-14.

Now considered to be one of the iconic examples of Jugendstil porcelain, the new design not find favour in all quarters. A contemporary German critic declared: “Van de Velde has not understood how to do justice to the delicacy of the material.”

The price of 1074 Marks for a complete edition with gold decoration also put it out of reach of most customers: the average monthly wage at the time was 76 Marks.

Today’s collectors are now expected to invest around €6000.