A selection of 17 upcoming lots from auctions taking place around the UK. This Victorian Highland Light Infantry regimental plaid brooch (pictured top) carries a full set of hallmarks for the Edinburgh silversmith R&HB Kirkwood and the date letter for 1893. It is expected to bring £150-250 at Thomson Roddick in Carlisle on March 10. This Gothic revival transfer-printed pottery jug by Old Hall Earthenware Company is probably one of the designs produced for the Hanley, Staffordshire, factory by Christopher Dresser.

A number of Old Hall patterns have been attributed to Dresser, but only three (dinner services with patterns called Persian, Shanghai and Hampden) include his facsimile signature. At the Antiques & Interiors sale at TW Gaze in Diss on February 5 it is guided at £50-75. The Vintage & Antique Toy sale at Mitchells in Cockermouth is now a timed online event closing on February 14. This late 19th century carved and painted rocking horse with dappled grey colouring and red leather salle is guided at £100-150. The Prints & Editions sale at Forum Auctions in London on February 4 includes this David Hockney (b.1937) poster for Olympische Spiele München in 1972. The Cotswold Auction Company’s February 9 Books and Collectables auction in Cheltenham will include a single-owner collection of antiquities from Lionel Walrond.

He was born in 1927 to tenant farmers, but on leaving school he was not drawn to a farming life and became fascinated by history and archaeology. This interest led to the discovery of three Roman mosaics in south Somerset before his 18th birthday.

He collected local and historical artefacts, setting up his own museum in a converted Second World War army Nissan hut. Walrond moved to Stroud in 1955 to take up the post as curator at the Lansdown Museum, a post which he held for 37 years.

Included in the auction is this Babylonian terracotta cuneiform fragment from the reign of Nubuchadnezzar II which has an estimate of £200-300. The Music & Entertainment sale at Special Auction Services in Newbury on February 16-17 includes this UK quad poster for Jaws (1975). This first release version with artwork by Roger Kastel is in excellent condition. Cast as the head of Bacchus, it is marked with the assayer’s mark AR for Alexandr Vasilyevitch Romanov and the stamp of the imperial jeweller Bolin. The Interiors sale at Bishop & Miller in Stowmarket on February 5 includes this Tunbridgeware nutmeg grater estimated at £40-60. The Costume, Accessories and Textiles Sale on February 13 at Tennants includes this Regency cream figured silk wedding jacket worked with intricate frogging, piping and tassels. It was worn by by Mrs Sackham (née Harriet Wickens) when she married in 1815. This 1960s Omega Seamaster has a guide of £2000-3000 at Charterhouse in Sherborne on February 4. It was found by the auction house in its leather case while clearing a Dorset cottage. An Antiques & Vintage sale at Gardiner Houlgate in Corsham, Bath, rescheduled as an online event for February 11, includes this Arts & Crafts oak dresser with a canopy back and canted base.

The design is thought to be by the Scottish architect Richard Norman Shaw (1831-1912). This Victorian silver acanthus leaf caddy spoon with marks for Birmingham, 1842 and JT, probably for John Tongue, comes for sale at Taylor’s of Montrose on February 11 with a guide of £40-60. The diecast and hinged components made in much the same way as model cars were sold at the time as single items or as boxed sets priced at around 2 shillings each in the firm’s c.1936 catalogue.

The three sets come still attached to original backing cards by original strings. This Bedroom set (numbered 102) consists of a bed, wardrobe, dressing table, cupboard, chair and foot stool and has an estimate of £250-350. Ewbank’s in Send, Surrey, will offer the original foyer doors from the Abbey Road recording studios as part of an Entertainment, Memorabilia & Movie Props auction on February 25.

The doors, through which The Beatles would have passed to record around 90% of their material between 1962-70, were a fixture from 1931-88. Removed as part of a refurbishment, they were acquired by an EMI executive and have remained in private ownership since.

Recording engineer and studio manager Ken Townsend, who worked at Abbey Road from 1950-95, has provided a letter of authenticity. Westminster City Council is upgrading its portfolio of enamel street signs and is selling off more than 200 examples at Catherine Southon in Chistlehurst.

The signs were created by architect and designer Sir Misha Black (1910-77) in 1967 and the familiar black and red sans serif lettering is copyrighted meaning they cannot be reproduced without permission from the council.

Among the highlights at the timed online sale running from February 17-March 3 is Abbey Road NW8 which carries an estimate of £1000-2000.

Other lots in the sale include Pimlico Road SW1 and Westbourne Park Road W2. 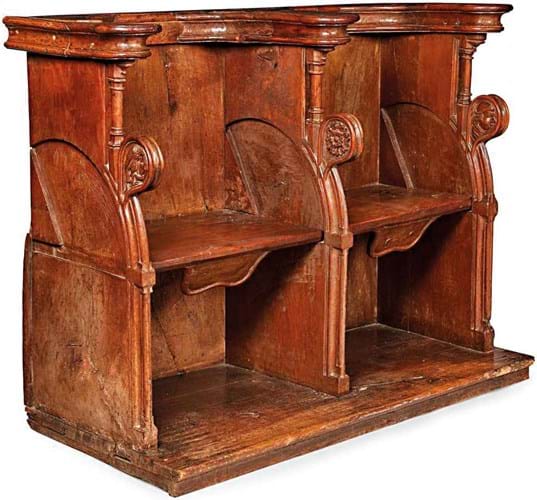 The Five Centuries sale at Lyon & Turnbull in Edinburgh on February 10-11 includes this 4ft 10in (1.48m) oak and walnut choir stall from the late gothic period.

The core elements are 15th century with some later additions. Carving to the supports and the misericords includes roundels depicting a stork, a rose, and the portrait of a man. Silver kettle, stand. and spirit burner in the rococo taste – estimate £2000-3000 at John Nicholson’s on February 26.

Made in London in 1813, this silver kettle, stand. and spirit burner in the rococo taste carries an estimate of £2000-3000 at John Nicholson’s in Fernhurst, Surrey, on February 26.