A selection of fourteen upcoming lots from auctions taking place around the UK. Painted oak advertising board for the Gaiety Theatre - estimate £80-120 at Brighton & Hove Auctions on March 26.

This painted oak advertising board for the Gaiety Theatre (pictured top) has a guide of £80-120 at Brighton & Hove Auctions on March 26. The Gaiety on Park Crescent Place in Brighton was demolished in 1930.

brightonandhoveauctions.co.uk or see this item at thesaleroom.com This Louis Wain pen and ink sketch is titled Here’s a penny, now go and play on the lawn next door. Can’t Mum! They have just given me sixpence to play on yours.

To the reverse of the frame is a label for the Brook Street Art Gallery reading Original Annual drawing by Louis Wain.

cornwallauction.co.uk or see this item at thesaleroom.com This Victorian mahogany adjustable bergere steamer bed has an estimate of £100-200 at Gardiner Houlgate in Corsham, Bath, on March 25.

gardinerhoulgate.co.uk or see this item at thesaleroom.com In the final two decades of his life, Camille Pissarro (1830-1903) frequented Rouen to explore the pictorially rich harbour city with its many striking motifs. This work on offer at Bonhams in London was probably executed on one such trip in either 1896 or 1898.

Bonhams notes that ‘Dr Joachim Pissarro has kindly confirmed that this work will be included in the forthcoming catalogue raisonné of drawings by Camille Pissarro’. Consigned from a private collection, it was acquired from JPL Fine Arts, London, in January 1991. South London auction house Roseberys has been instructed to sell the collection of Herbert Kennard on March 26. Kennard, who died last year aged 100, still lived in the apartment in which he was born, although he had travelled extensively and worked abroad.

A close friend, Ian Turner offered the following memories: “You never visited Herbert but were rather received by him, as he was always seated in a large armchair in his entrance hall. Time keeping was paramount. Five minutes early was unacceptable, and ten minutes late was a total disaster. Herbert’s collecting seemed to have started in earnest, some 40 years ago, when Helen, his Governess, passed away. He adored her, but she didn’t like the idea of Herbert collecting.”

Kennard had a deep affection for 18th century English furniture, satinwood in particular and associated works of art such as boxes, tea caddies and trays. Working in Berkeley Square, he made purchases from leading antiques dealers often at the top fairs.

This pair of Regency parcel gilt and painted satinwood occasional tables/pole screens bought from Ronald Phillips in June 2006 come with an estimate of £2000-3000.

This 4ft 6in (1.37m) version of the well-known BP Motor Spirit Union Jack enamel sign by the Falkirk Iron Co Ltd has a guide of £350-450 at a Collectors Auction held by Special Auction Services in Newbury on March 30. This 31oz silver askos form claret jug is stamped to the edge of the footrim Storr & Mortimer 134. It has a maker’s mark for John Samuel Hunt (who joined the partnership of Paul Storr and John Mortimer in 1826) and the London date letter for 1838.

michaeljbowman.co.uk or see this item at thesaleroom.com A rare Penny in the Slot Polyphon called The Marvel comes for sale on March 28.

It is designed in an ornamented walnut case, featuring steel tongues and harmonium reeds, triangle and drum with an equally ornate stand.

The polyphon is estimated at £12,000-15,000 in this sale held by Unique Auctions of Lincolnshire.

unique-auctions.com or see this item at thesaleroom.com 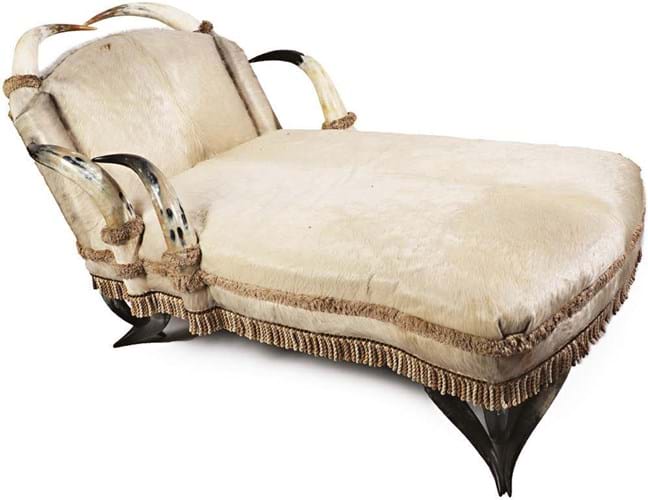 Tennants of Leyburn conducts a single-owner sale titled The Curious Collector on March 27. The 400 lots are an eclectic mix of fine art, antiques and design-led furnishings put together with an eye for the unusual and a sense of humour. This ‘cow horn’ day bed by contemporary French designer Michel Haillard has an estimate of £2500-3500. The Dawsons auction in Maidenhead on March 25 includes a collection of Chinese porcelain collection from a London client.

Elements of the collection were those unsold in 1918 when The AF Bowman Collection of Old Chinese Porcelains was offered across three days in New York.

The name Bowman was chosen by the auctioneers at the time; a westernised version of Adolf Fredrik Bohman, the collector’s real name, given the context of First World War.

This Qianlong famille rose porcelain cornucopia wall pocket has an estimate of £400-500.

dawsonsauctioneers.co.uk or see this item at thesaleroom.com This oil sketch titled Battleships at anchor has been authenticated by Angela Weight, keeper of paintings at the Imperial War Museum from 1981-2005, as the work of Sir John Lavery (1856-1941).

Lavery was one of the most prolific official war artists of the First World War and probably painted this scene somewhere along the coast of the Firth of Forth. He painted there in September 1917, in the summer of 1918 and again after the Armistice when the German Grand Fleet was interned at Rosyth.

theswan.co.uk or see this item at thesaleroom.com This George III mahogany Gothic side chair, c.1760, is on offer at Dreweatts of Donnington Priory on March 30-31 from the family of well-known local collector Daisy Fellowes.

Her home Donnington Grove was built in 1763 for the historian and antiquarian James Pettit Andrews and designed in Strawberry Hill Gothic style.

The chair bears many similarities with chairs designed by Richard Bentley and made by the London cabinet-maker William Hallett.

This unmarked silver counter box made c.1632 is a type associated with the workshops of Simon and Willem de Passe.

The Sovereigns of England boxes, pierced to the cover with a bust of Charles I and to the base with Henriette Maria, were originally sold with 36 counters each depicting English monarchs from Edward the Confessor to James I, plus Mary Queen of Scots and other Stuart royals.

This example retaining 31 counters comes for sale at Chiswick Auctions in west London on March 31 with a guide of £2000-3000. The March 25 sale at Rendells of Ashburton includes this unusual Victorian diorama of a cow and her calf. The animals, made in painted and carved wood and gesso, are housed in a glazed display case.

rendells.co.uk or see this item at thesaleroom.com