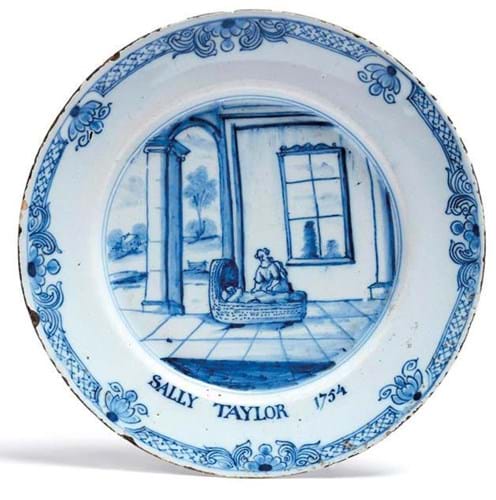 This documentary delftware plate (pictured above) inscribed Sally Taylor 1754 comes for sale at Woolley & Wallis on October 7 with a guide of £1500-2000.

Painted in blue with a scene of a mother tending a child in a large cot, it is illustrated in Dated English Delftware by Lipski and Archer and was last sold at Sotheby’s in 1954. This 11in (28cm) bronze titled Head of Queen (Study) by Henry Moore (1898-1986) was conceived in 1952 and cast in 1959 in an edition of two plus one artist’s proof. It is one of several preparatory works produced by Moore for the large-scale group sculpture King and Queen.

This cast was acquired by the vendor’s family from the Finart Gallery in Johannesburg in 1974. It comes for sale on October 12 at Dreweatts in Newbury with a guide price of £50,000-80,000. British Toy Auctions is holding a specialist sale of Star Wars action figures, vehicles, dioramas and more on October 15. The majority of the lots are from a single-owner collection that has taken over 10 years to accumulate and covers the original 1970s toys to the modern releases and special limited editions.

Items were sourced from collector forums, specialist auctions and regular buying trips to the US and by attending events such the San Diego Comic-con to find exclusive pieces and plenty of rarities. The Roundelwood collection of Worcester porcelain comes for sale at Kinghams in Moreton-in- Marsh on October 9.

The collection comprises hundreds of pieces from the factory’s Dr Wall period acquired over a period of 40 years by the vendor’s parents. Most pieces are in good condition.

Estimates for the first tranche of the collection range from £50-400. This polychrome lettuce moulded sauce boat from c.1756 is guided at £200-300. Louise, born into a noble family at the Château de Kéroualle, near Brest, met Charles II when accompanying his sister Henrietta Anne Stuart, Duchess of Orléans, to Dover in 1670. He later appointed her a lady-in-waiting to his own queen, Catherine of Braganza. In 1673, she was granted the titles Baroness Petersfield, Countess of Fareham and Duchess of Portsmouth but Charles called her affectionately ‘Fubbs’, and in 1682 renamed the royal yacht HMY Fubbs in her honour.

This oil on canvas showing the duchess with a cupid is attributed to Henri Gascars (French, 1635-1701). It was in a private collection in Gloucestershire from the early 19th century before it was sold by Lane Fine Art to the vendor’s father.

Engraved with two faces, it is number 33 from the edition of 100 produced in 1953, with the underside signed Edition Picasso 33/100 Madoura.

The 14in (36cm) high vase comes from a private collection; the dispersal of an artist’s estate. Penned to a Miss Edwards, the letter covers nursing provision in London and the importance of training for nurses with Ms Nightingale offering “to train nurses for you, free of cost, at King’s College Hospital [The sum we are obliged to charge for board &c I should be too glad to pay for you myself – it would be my small contingent for your noble institution].”

The Modern and Contemporary British art sale at Roseberys London on October 13 includes a series of lots being sold to benefit the Royal Society of Sculptors. Most pieces had been donated to the society.

It includes this 20in (55cm) wide bronze, Gateway of Hands, by Glynn Williams (b.1939). This is a maquette for a work of the same name commissioned in 1993, and sited opposite Chelsea Harbour Design Centre on Harbour Avenue.

A collection of Mouseman furniture and furnishings from chef Marco Pierre White’s hotel, the Rudloe Arms in Wiltshire, is coming under the hammer at Tennants in North Yorkshire.

The 65 lots, which include an array of classic Mouseman pieces, will be sold in the 20th Century Design Sale on October 9.

Having found himself with pieces of Mouseman furniture surplus to the current needs of the hotel, the chef says he is “delighted to return a selection to Yorkshire where they will find new homes”.

Highlights include this impressive 10-foot oak refectory table, made in 1955 for the boardroom at John Smith’s Brewery, Tadcaster, estimated at £4000-6000. The Parker Fine Art auction on October 7 in Farnham, Surrey, includes a collection of prints relating to Napoleon from the estate of a local collector. This year is the 200th anniversary of Napoleon’s death.

The engravings and etchings in this auction are mostly satirical and political cartoons, unashamedly jingoistic, reflecting the anti-French feeling of the time. In the 1950s, India’s first prime minister, Jawaharlal Nehru, a man with ambitions to propel his country into a new era unburdened by its past, commissioned Charles-Édouard Jeanneret (aka Le Corbusier) to create the master plan for a new, utopian city: Chandigarh.

Le Corbusier called on his cousin, Pierre Jeanneret (1896-1967), to aid in the design process, which included creating the city’s furniture.

Jeanneret conceived a number of chairs and tables and had them made by local artisans out of inexpensive Burma Teak that was resistant to both the humidity and the bug population of the area. Oil of a mountainous landscape authenticated as the work of the Flemish artist Paul Bril – estimate £50,000-70,000 at Lawrences.

“It is an extraordinary find in two ways”, says Richard Kay at Lawrences in Crewkerne. “Not only is it very rare to find such a fine and genuine work by this Flemish master in England but there is an unexpected extra element of interest. Thanks to the expertise of Dr Luuk Pijl, the Bril authority in the Netherlands, it seems this canvas is very probably the picture depicted in the background of Willem van Haeght’s Cabinet of Cornelis van der Geest (1626), now in the Rubenshuis in Antwerp.”

“The picture, previously unknown to scholars, is thought to have belonged to Cornelius van der Geest”, says Kay. “Its later history is a little unclear but it was certainly owned by Thomas Ware Smart (1810-81), ancestor of our vendors and an Australian art dealer who had a gallery in Sydney. It has been treasured by his descendants ever since, with a degree of nagging uncertainty about the traditional attribution to Bril.”

Sideboard produced by the Makepeace factory in the 1960s – estimate £1000-1500 at Amersham Auction Rooms.

On October 7 Amersham Auction Rooms in Buckinghamshire is selling a dining table with eight chairs and a sideboard produced by the Makepeace factory in the 1960s.

It is part of the Pye family estate based in Oxford; the saleroom has been told that John Makepeace was a friend of Graham Pye.

The dining table (guided at £200-300 with the chairs in a separate lot), is basically a “massive plank of Andaman padouk, the same species favoured in the most classic Chinese furniture”, says the saleroom. It was chosen for a group of fine furniture for the British governor of the Andaman Islands.

British PM Margaret Thatcher was among Makepeace’s private clients and opened a London exhibition of his furniture. On that occasion she saw a table he had made for Graham and Yvonne Pye, and the designer was asked if she could have it. Graham kindly agreed so long as Makepeace made another for them.

amershamauctionrooms.co.uk or see this item at thesaleroom.com Thomson Roddick’s Gretna coach sale on October 13 includes this state landau, c.1830. It is believed to have been used by Queen Adelaide, wife of William IV. It later served as the State Coach for the Judges of Assize at Carlisle. It played a part in the Carlisle Historical Pageant of 1928.

The sale is being held without estimates.

thomsonroddick.com or see this item at thesaleroom.com